Interestingly enough, June has three gemstones associated with this month. There is an odd story associated with the birthstones that is not well known among the general public. While there have always been stones associated with seasons, zodiac signs, birth totems, religious figures etc… The “traditional” birthstones we see today are actually a 1912 marketing invention. Prior to 1912, birthstones varied depending on culture and religion. There was also the issue of some stones being represented in multiple months. Pearl, for example, is a birthstone of February and November. June’s birthstones were actually cat’s eye, turquoise and agate, mainly in relation to the zodiac signs of Gemini and Cancer within the month of June. In order to “standardize” the birthstones, the National Association of Jewelers, now called Jewelers of America met in Kansas, and officially adopted the list you see today. Over the years, other gemstones were added to raise sales of that particular stone.

That’s right, there is no true reason for the monthly gemstones you see today other than to try and increase sales of that stone. Yes there is some relation to traditional stones mentioned in religious/spiritual text but that was not the focus. I find it interesting that some of the most expensive gems are birthstones over their less expensive counterparts or how some months have multiple stones if the previous birthstones were of lesser value, like June.

In the previous months I didn’t touch on this subject as most months had only one stone, with the exception of March that has bloodstone and aquamarine as its representative birthstones. Since most people are unfamiliar with bloodstone (a silicate relative of agate, onyx, jasper and chalcedony) I chose the latter. However, as June has three stones, moonstone, pearl and alexandrite. I chose my favourite stone of the three, Alexandrite.

Alexandrite is a variety of the mineral species chrysoberyl, with the chemical formula BeAl2O4 and while the name is similar to beryl, it is only the presence of beryllium that connects these two stones. The other variety you might be familiar with is the gemstone “cat’s eye” also known as cymophane. Etymologically, chrysoberyl is derived from the Greek words χρυσός chrysos and βήρυλλος beryllos, meaning “a gold-white spar”. However, the Greeks never knew of this stone.

What is so fun and interesting about this gemstone/mineral is that we have a record of its discovery, and when it became a classified mineral. Chrysoberyl was discovered in 1789 and then described and classified as a new mineral in 1790 by the German geologist Abraham Gottlob Werner. This was the golden-yellow variety of chrysoberyl that many may have confused for a light coloured peridot. Alexandrite was discovered later, and originally was thought to be some unique variety of emerald. It was discovered in 1833 along the Tokovaya river of the Ural Mountains. It was described as a greenish crystal, with the strange ability to change color and appear red under candlelight. Then in 1834, the Finnish mineralogist Nils Gustaf Nordenskiöld had the mineral new gemstone officially classified as a variety of chrysoberyl and named the unique variety “alexandrite” in honour of  the future Tsar Alexander II of Russia.

Alexandrite is identified as:

Now what makes alexandrite so appealing and expensive.

To date, alexandrite is among the most expensive gemstones per carat weight due to its rarity, durability and unparalleled beauty. Current prices of alexandrite place the stone from $30,000 per carat up to $60,000 per carat depending on the 4 C’s. For reference a carat is equal to 0.2g and since it’s exceedingly rare to find a cut alexandrite over 5 cts, the price jumps rapidly. Now an interesting side note, because alexandrite and cat’s eye are the same mineral you can have the two combined, which is extremely rare and pricey. With a Mohs hardness of 8.5, being only surpassed by sapphire, ruby, moissanite and diamond, this stone’s vitreous luster is quite resilient. While the stone is rare and durable, it’s beauty is what sets it apart from the other stones, mainly its ability to change colour.

Alexandrite has an interesting way of playing with physics and light. It possesses a characteristic phenomenon known as metamerism or more simply “colour change”, which is the ability to appear different colours with different light sources. Alexandrite was one of the first gemstones discovered to display this phenomenon so strongly. The stone appears emerald green in daylight and raspberry red in incandescent light. This colour change varies stone to stone and it’s all because of the presence of chromium in the mineral. The alexandrite variety of chrysoberyl results from the small scale replacement of aluminium by chromium ions in the crystal structure, BeAl2O4 as the valence electrons are similar. The presence of chromium results in an intense absorption of light over a narrow range of wavelengths in the yellow region (580 nm) of the visible light spectrum. Human vision is most sensitive to green light as it is perceived brighter and least sensitive to red light as it is perceived dimmer. When you combine the absorption of the yellow light, mixed with the colour sensitivity of the human eye, alexandrite appears greenish in daylight, as the full spectrum of visible light is present. However, in incandescent light it appears reddish as this light emits less of the green and blue spectrum and more red. Science to us, but it was magic and witchcraft to those of the past.

As alexandrite is so wildly desired there are imitation and synthetic stones to watch out for. The main stone gemmologists see imitating alexandrite is a variety of synthetic colour change sapphire with vanadium to produce a colour change. When looking to see if this stone is alexandrite or sapphire, we look for curved striae within the crystal. These are curved lines created from the process of how they make synthetic sapphire (I will go into more detail about this process next month as we discuss rubies). These imitation stones will appear more blue than green in daylight as it is oddly hard for chemists to make emerald green sapphire. When viewed in incandescent light you will see more of a purple hue than red. There is also colour change cubic zirconia that can imitate alexandrite. Again the colour is not the same and you will see that price does not match the clarity and beauty of the stone. It is important to keep the price in mind because even true synthetic alexandrite costs more per carat than the two limitations mentioned above. Interestingly, some other natural colour change stones may be used to pass off as alexandrite. Zultanite, which is a lime-green to pink colour change stone, is such a gemstone. It’s a natural stone but because of the price difference it is sometimes used to pass off as a pale alexandrite.

Synthetic alexandrite is created through a process known as the “flux-melt” process, a method that involves adding fluxes to the melt to help with lower melting temperatures and cleaner crystallization. For alexandrite the process is a bit different, using what is known as the Czochralski pull method (say that 5 times fast). In a nutshell, synthetic alexandrite is grown from a melt by lowering a seed crystal into the melt to start the crystallization process and then slowly pulled up and rotated. As the seed crystal is pulled up the melt cools and crystallizes into a clean mineral cylinder. Since all minerals carry evidence of formation within them, this process will lead to unique liquid filled feather and blebs within the crystal. There may be teardrop shape inclusions or presence of platinum crystals within as platinum is used as a flux in this process. If you have a really good eye, you may be able to see swirls within the crystal as a result from the twisting motion of formation. Natural crystals don’t have any of these features within them, Instead natural alexandrite will feature other mineral inclusions and/or very geometric inclusions and fractures filled with only water and carbon dioxide. Even though this stone has a synthetic counterpart, its colour will still appear off compared to a natural alexandrite, science has yet to discover how to make an exact copy of these beautiful gems.

Regardless, alexandrite is one of most beautiful stones I have seen. It will always be a regal stone to me and many others. Next month I dive into the reddest of the red, ruby. 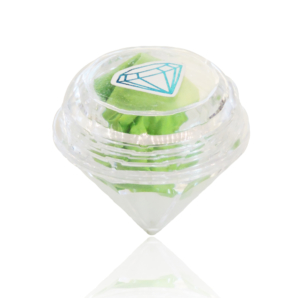