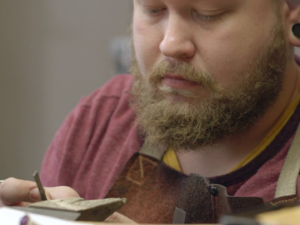 Alex Kinsley Vey is from Hamilton, ON where he received jewellery training from his parents. Moving to Toronto in 2010 Alex studied jewellery at George Brown College, receiving an Advanced Diploma in Jewellery Arts in 2013.

Alex has shown work in Canada, Europe, and the United States. He has been a member of Craft Ontario since 2012, Klimt02 since 2017, and was accepted into Harbourfront Centre’s Artist-in-Residence program in 2015 where he worked until 2019.