In December I had the pleasure of visiting a true enamel master in his studio outside of Montreal in the town of Les Cedres. Seguin Poirier is a master enamelist who began his career as an enamel artist in the late 1960s. He enamels primarily on large scale sheet metal. He told me had done some jewellery work earlier in his career, but after a short time began to use enamel in a loose and unprecedented way, applying it liberally and without inhibition, playing with enamel as painter mixes paints on a canvas. His studio was impressive, jars of enamel powder everywhere, by the ton, which he imports from near and far, including India and China. I enjoyed a candid tour of one of his two studios, this one in a traditional Quebec Habitant style home (the other an impressive space in Griffintown, the old Irish part of downtown Montreal). He was very helpful to me, taking a look at some of my one-of-a-kind jewellery pieces and had very positive feedback for me. “Just go for it” he said, “you will have no problem, as long as you love what you do and you keep making something different that no one has seen before”. Solid advice from a hard worker. Something about that great Quebec spirit, made me miss my home town of Montreal!

So here are some photos I took while visiting:

OK, so first off, let’s talk about this kiln. This is a serious kiln. I forgot to ask how long it takes to heat up, but I imagine many many hours. It is a custom-built electric enamel kiln designed by Seguin Poirier himself to accommodate his very large sheets of copper. This is actually the world’s largest enameling kiln. It was still warm from the previous day’s firing, and two people could lie comfortably side by side in the kiln. HUGE! 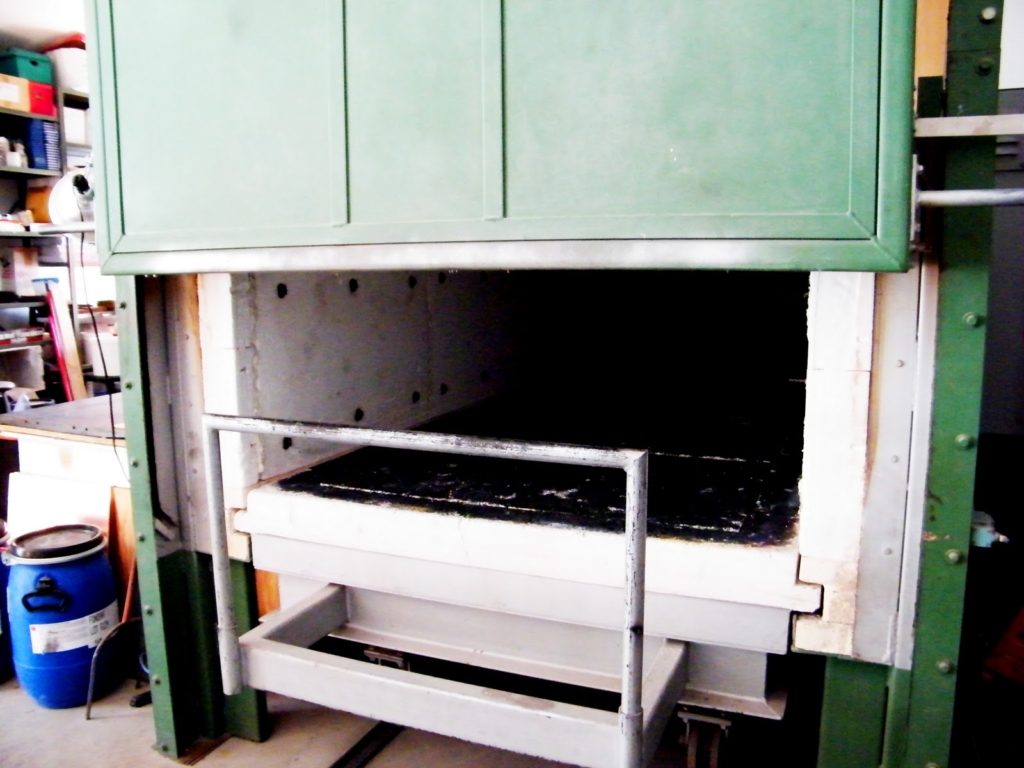 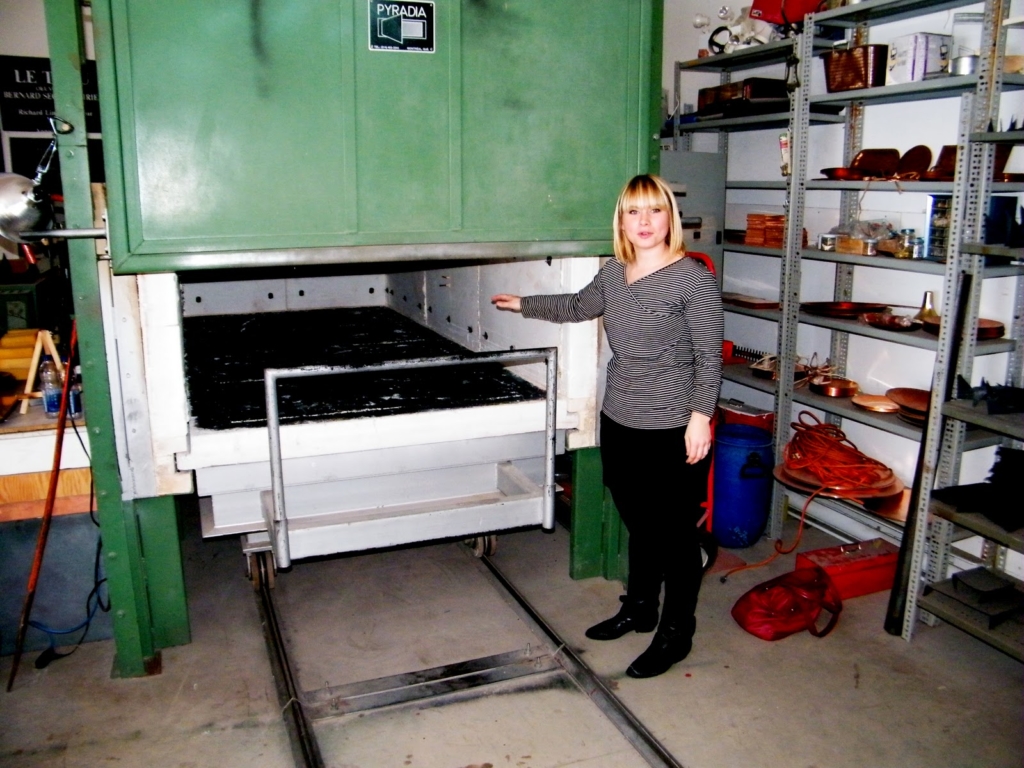 Next was the “Chapel”. This room is covered floor to ceiling with enamelled copper artwork. The walls are decorated with enamelled panels, from small plates and tiles to 3x5ft paintings. The walls of this room depict historical celebrations, seasonal transitions of Quebec (everything from the harvest to the Jazz Festival!)

He uses this room, which took over 7 years to complete, to host creative suppers (my father has gone to one for Valentine’s Day) where patrons can enjoy a great meal, music and live demonstration of enameling by the artist, who completes a painting during the evening with input from all the guests! 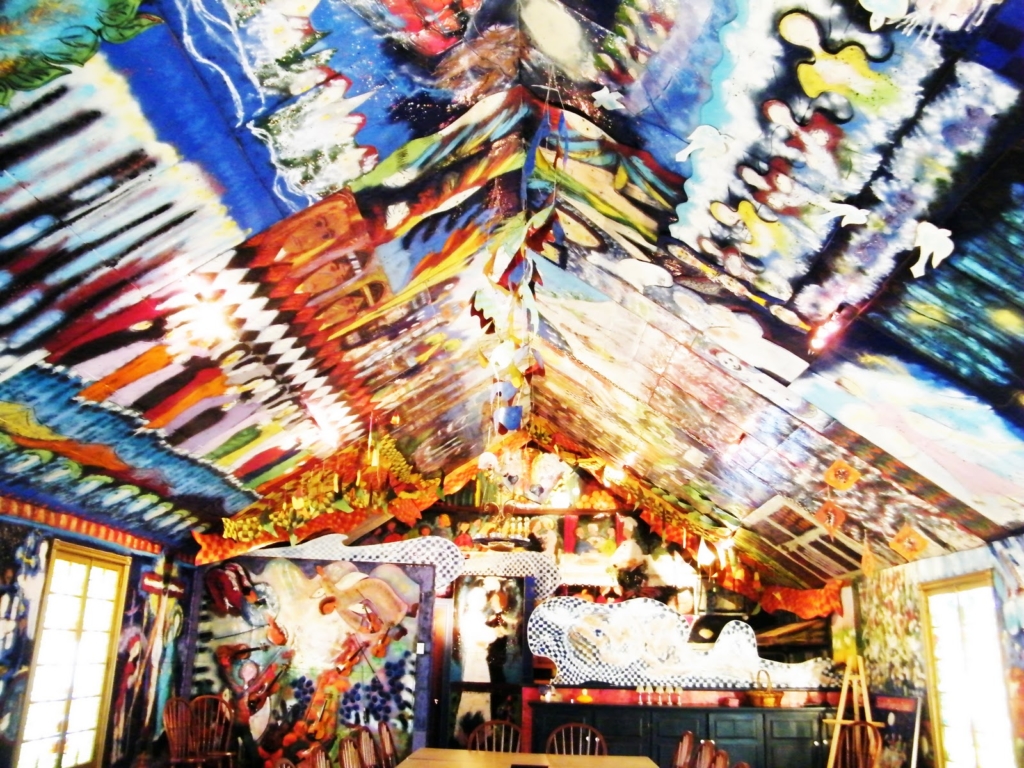 I tried to get photo of the wall close up, you can see the scratch lines and textures the artist makes, one of the techniques I teach in my enamel class, so I was really excited to see it used on such a large (and colourful!) scale. Overall it was a wild and overwhelming environment, especially for me the enamel enthusiast.

You may visit Seguin Poirier’s website to see more of his work, community projects, installations and shop here: https://www.seguinpoirier.com/indexz.htm

So since the holidays and this fun visit, I have been cultivating more ideas on how to use enamel in a more painterly fashion. It is harder to do on a smaller jewellery scale, but I have been experimenting with oxides, changing pale colours (i.e. whites, creams, pale blues) naturally with copper dust, or by exposing parts of the metal surface. I typically have used solid opaque enamel surfaces in my jewellery, but for my latest piece, which will soon be show at an curated exhibition in the York Quay Building at Harbourfront Centre, I’m embracing the overfired, burnt and oxidized look. The pieces for the show entitled “Yield” which will showcase 8 Canadian Contemporary Jewellers have to do with stress as a theme, both in concept and material treatment. Coming soon! I’ll post more details and a sneak peek as soon as I shoot the photos with my friend Kate, who has been immensely helpful with photography as of late. The show is scheduled to open mid-April. Other jewellers are Catherine Allen NS, Colleen Baran BC, Paul McClure,ON,  Silvie Altschuler QC,  Shannon Kennedy ON, Anneke van Bommel ON and Bridget Catchpole BC, what a great roster!
If you want to learn more about enamelling, I am teaching my 8 week class at Jewel Envy starting this month, Thursday, February 17 (that’s next week!). There is also a 1 day workshop scheduled for Sunday, February 20. We now have two kilns, which is super exciting, room for more students in a class, which is always great, as I think the more experimenting that goes on and is shared amongst students the better…..you can always discover something new with enamel, which is why I am so passionate about the process, and enjoy teaching others about it too! Hope to see you there!
Until next time, keep plenty of colour in your life.
Emily
www.emilygill.ca
Tags: #classes, enamel, art jewellery, emily gill, enamelling, painting, seguin poirier